On 9th November 2016, Symmetra invited a visiting South African judge, Justice Davis, to deliver an engrossing exposition on bias, conscious and unconscious in judicial decision-making.  This session, hosted by Herbert Smith Freehills was very well attended by barristers, solicitors and the Hon. Jane Matthews AO of the Supreme Court of NSW.

Justice Davis was able to convey quite forcefully how cognitive biases impact on all of us including the judiciary and gave examples of how the personal predispositions and innate biases have influenced judicial decision-making in jurisdictions such as the UK, USA and South Africa. He contended that structuring the judiciary  in countries such as Australia so that it is as diverse as possible and  its members reflect different social, cultural and intellectual perspectives is an important  means of  counteracting the negative effects of bias  and showed convincingly that judges from  different backgrounds will   sometimes view the same case quite differently.

By placing his case illustrations against the backdrop of current political events such as Brexit and the American Presidential Election (where Trump was announced the winner that very afternoon) Justice Davis imparted an overwhelming sense of relevance and immediacy to the subject of conscious and unconscious bias to all who attended. The message is clear- it is imperative for all professionals to counteract the impact of unconscious bias on the decisions that they make- and accepting this intellectual reality is a prerequisite for taking action. 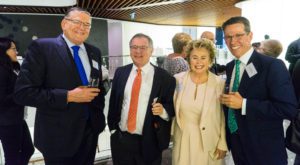