Home > Symmetra > The Evolution of Supplier Diversity: From Social Responsibility to Business Advantage
by Errol Price 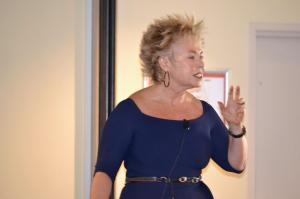 On 1st December, Heather Price, CEO of Symmetra delivered a presentation on Supplier Diversity to the Pride in Diversity Workplace Conference, held in Sydney.

While focusing on the LGBTI community as a component of the diverse supplier grouping, the theme of Heather’s talk was the changing rationales and evolving understanding of the benefits of embracing Supplier Diversity in general.

Heather explained how Australian businesses, in particular, have made giant strides in the appreciation of embedding supplier diversity as a fundamental principle of procurement programmes. They have done this because it is now clearly accepted that the advantages arising from the latest supplier diversity paradigm current in Australia flow in both directions – equally for the procuring organisation as much as for previously disadvantaged supplier groups.

Tracing the history of this approach to procurement, Heather noted that supplier diversity has its origins in the United States when the first Federal Government – sponsored program began in 1969 in conjunction with the Civil Rights Movement. An executive Order signed by President Nixon required government agencies and their contractors to contract with minority-owned companies and to report the results against pre-established goals. The National Minority Supplier Development Council (NMSDC) was formed during the 1970s to certify businesses as Minority Business Enterprises.

In essence this was an ethical initiative supported by Government directive designed to give impetus to the enabling of previously disadvantaged groups to establish a significant presence in the economy.

In South Africa, where unequal economic rights had previously been entrenched by law, remedial legislation has been passed which requires the implementation of transformative measures to improve the participation of the black population in the economy – including rules about supplier diversity. Again this was a move through legislative intervention to modify traditional supply arrangements so that those who had been largely prevented from supplier undertakings could now gain a competitive foothold.

This kind of legislated supplier restructuring while necessary in some societies can be constraining because, by its nature, it limits the scope for choice and selection.

Later, however, in the USA and elsewhere businesses started to comprehend that supplier diversity was not simply an expression of social goodwill but could be leveraged by organisations to offer a competitive business advantage for themselves.

These benefits flowed initially from a business imperative – the realisation by U.S. businesses of the need to cater for a continuously diversifying customer base. From this came the awareness that the makeup of the range of suppliers to organisations should be reflective of and resonate with their increasingly diverse customers.

Businesses which accepted this proposition soon found that they penetrated sectors of the market where they previously had little or no presence. They also found that once customers became aware of their supplier diversity programs, the brand loyalty of these customers increased.

In Australia, businesses are not constrained by legislation and can explore and leverage supplier diversity to their maximum economic benefit. Australian business has accordingly leapfrogged to the next level of supplier diversity, pursuing diversity in their suppliers for performance rather than just governance requirements.

Progressive Australian businesses now accept that a diverse range of suppliers can help them gain access to new ideas, can increase competition, can provide them with a more flexible service and most importantly can offer untried and innovative features to the supply chain which ultimately adds value for the consuming organisation. Supplier diversity for such businesses is not a specialised programme but is being integrated into their policies and procurement procedures as the best way to do business.

It is becoming increasingly apparent that supplier diversity is not a one-way street but has the potential to be a winner for all participants.